I wasn’t planning on making a ‘part 2’ to the Forecasting Time Series Data using Autoregression post from last week, but I really wanted to show how to use more advanced tests to check for stationary data. Additionally, I wanted to use a new dataset that I ran across on Kaggle for energy consumption at an hourly level (find the dataset here).  For this example, I’m going to be using the `DEOK_hourly` dataset (i’ve added it to my git repo here).  You can follow along with the jupyter notebook here.

In this post, I’m going to follow the same approach that I took in the previous one – using autoregression to forecast time series data after checking to ensure the data is stationary.

So, what do we need to do to check for stationary data?  We can do the following:

Let’s plot our data first and take a look at a couple different plots. First, let’s get our imports taken care of.

Next, let’s load our data and plot the time series.

Looking at the data, it looks pretty stationary. There’s no real trend in the time series but there seems to be something that might be seasonality, so we’ll dig deeper into the data.  Let’s plot a histogram to see what the underlying distribution looks like.

Looks Gaussian with a bit of a long tail skew toward the right. From this histogram, I’m pretty confident that we have a stationary dataset otherwise we’d see something much less ‘bell-shaped’ due to trending and/or seasonality (e.g., we’d see more data plotted to the left or right).

Now, let’s look at some statistical tests. A simple one that you can use is to look at the mean and variance of multiple sections of the data and compare them. If they are similar, your data is most likely stationary.

There are many different ways to split the data for this check, but one way I like to do this is to follow the approach highlighted here.

The above code creates three new series. I randomly selected 25% for series one and 75% for the two and three – but you could create them of equal length if you wanted. I like making them different sizes just for a bit of extra randomness to the test.

Next, we’ll look at the means and variances of each series to see what they look like. Remember, if the data is stationary, the means/variances should be similar.

The output of this is:

Not great formatting, but you can quickly see that the means and variances are similar, pointing to stationary data.

Now that you know how to find stationarity using some plots and some basic stats, you should know that the above tests can be fooled sometimes, especially since they make assumptions about your data. So…don’t rely on these only…they’re a quick way to see what you have without having to pull out the big guns and run things like the Dickey-Fuller test.

Officially, this is called the ‘augmented Dickey-Fuller test’, but most folks just say ‘Dickey-Fuller’ when talking about it.  This is a test that tests the null hypothesis that a unit root is present in time series data.    To make things a bit more clear, this test is checking for stationarity or non-stationary data.  The test is trying to reject the null hypothesis that a unit root exists and the data is non-stationary. If the null hypothesis is rejected, then the alternate can be considered valid (e.g., the data is stationary).  You can read more about the test here if interested.

When you run the test, you’ll get an ADF value and a p-value. The ADF number should be a negative number and the p-value should be beneath a certain threshold value (e.g., 1% or 5%, etc) for a confidence level. For this example, we’ll use 5% (or 95% confidence level), so if the p-value is greater than 0.05 then we say we fail to reject the null hypothesis because the data has a unit root and is non-stationary.  If the p-value is less than or equal to 0.05, we can say we reject the null hypothesis because the data does not have a unit root and is stationary.

Let’s run the Augmented Dickey-Fuller test and see what we see.  The statsmodels library has a function called adfuller to make it easy for us to run this test.

In this code, we import the adfuller library from the statsmodels library and then run our data through the test.  The full output of the test is:

Let’s look specifically at our ADF and p-values.

We get these results:

Now that we know its stationary, we need to see if its correlated (remember there’s an assumption of dependance / correlation for autoregression). Let’s look at a lagplot. 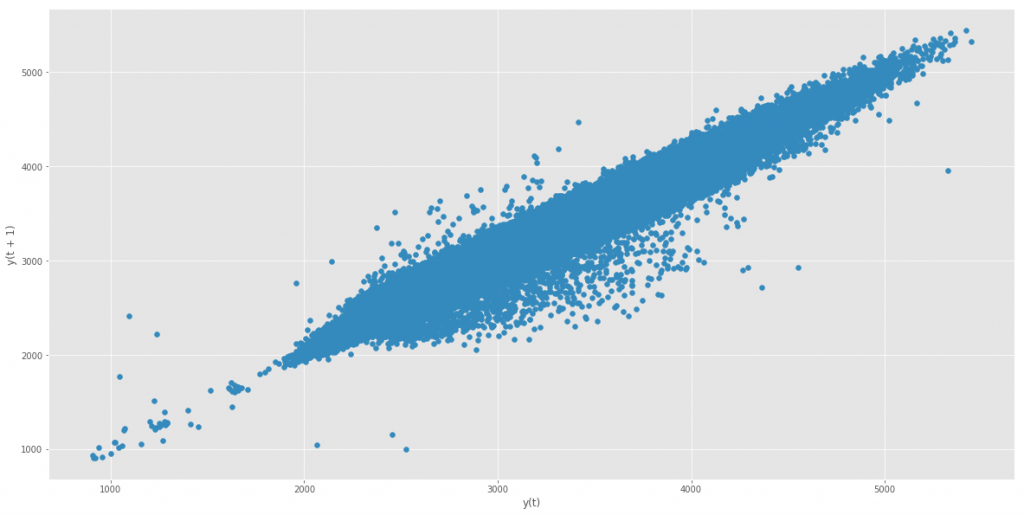 No question…that data is correlated somehow.

Now…we can actually DO something with the data! Let’s run a forecast on it now using autoregression.

We know our data is stationary and correlated (or at least we *believe* it is based on our tests). Let’s run our autoregression forecast and see what we see.

For this, we’ll use a different approach than we did before sine we have much more data. We’ll use the same training/testing data creation that we used in the previous post and create a 12 period testing dataset and prediction dataset (i.e., we are going to predict the ‘next’ 12 readings).

The lag value chosen for this model is 59.  Now, let’s make some predictions and check the accuracy.

In the above, we are making predictions and then creating a dataframe to compare the ‘predicted’ values versus the ‘actual’ values. Plotting these values together gives us the following.

Not a bad forecast with the cycle being pretty good but magnitude being a bit off. Let’s take a look at r-squared.

Our r-squared is 0.76, which is pretty good for a first pass at this data and forecasting, especially given the fact that our lag is auto-selected for us.

Hopefully this helps shed some light on how to use statistical tests and plots to check for stationarity when running forecasts with time series data.