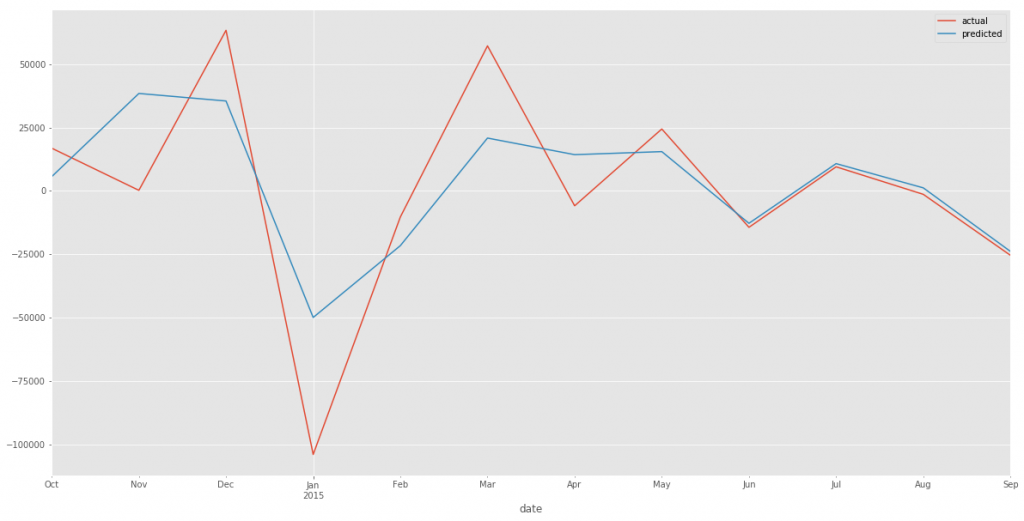 Autoregression modeling is a modeling technique used for time series data that assumes linear continuation of the series so that previous values in the time series can be used to predict futures values.  Some of you may be thinking that this sounds just like a linear regression – it sure does sound that way and is – in general – the same idea with additional features of the model that includes the idea of ‘lag variables’.

where a and b are variables found during the optimization/training process of the linear model.

where a, b1, b2 and b3 are variables found during the training of the model and X(t-1), X(t-2) and X(t-3) are input variables at previous times within the data set.

The above is not nearly enough statistical background to truly understand linear and autoregression models, but I hope it gets you some basic understanding of how the two approaches differ.  Now, let’s dig into how to implement this with python.

For this type of modeling, you need to be aware of the assumptions that are made prior to beginning working with data and autoregression modeling.

Lets get into some code and some actual ‘doing’ rather than ‘talking’.

For this example, I’m going to use the retail sales data that I’ve used in the past.  Let’s load the data and take a look at the plot.

Nothing fancy here…just simple pandas loading and plotting (after the standard imports for this type of thing). 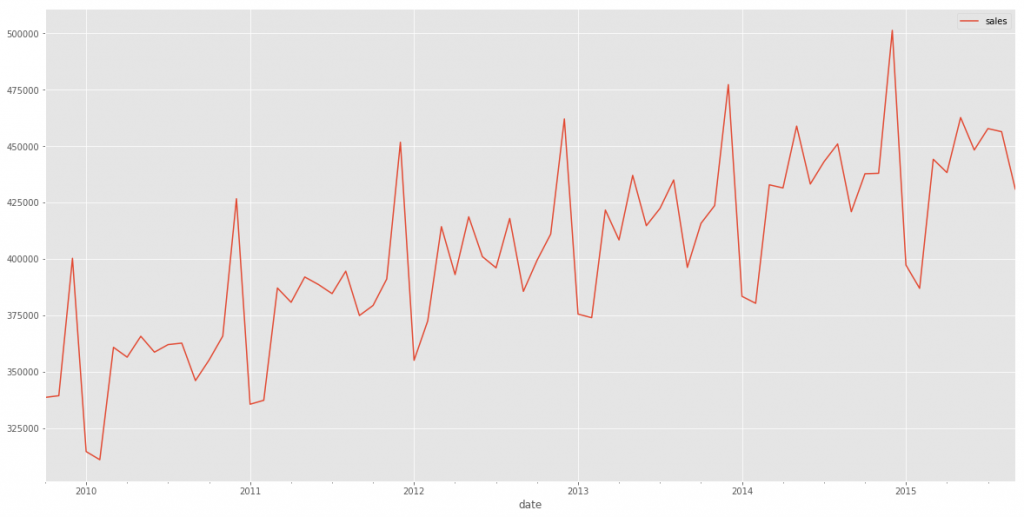 Let’s check for dependance (aka, correlation) – which is the first assumption for autoregression models. A visual method for checking correlation is to use pandas lag_plot() function to see how well the values of the original sales data are correlated with each other. If they are highly correlated, we’ll see a fairly close grouping of datapoints that align along some point/line on the plot.

Because we don’t have many data points, this particular lag_plot() doesn’t look terribly convincing, but there is some correlation in there (along with some possible outliers).

A great example of correlated values can be seen in the below lag_plot() chart. These are taken from another project I’m working on (and might write up in another post). 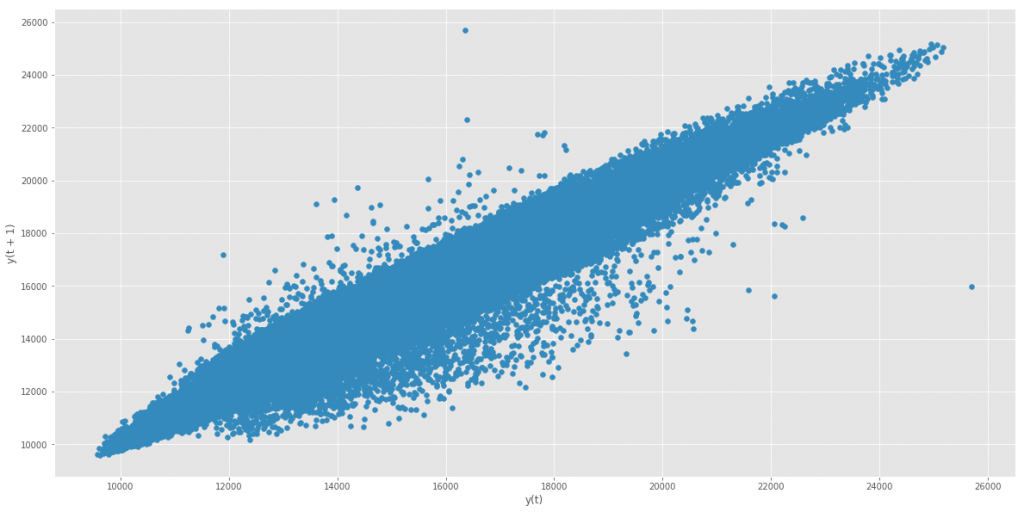 Like good data scientists/statisticians, we don’t want to just rely on a visual representation of correlation though, so we’ll use the idea of autocorrelation plots to look at correlations of our data.

Using pandas, you can plot an autocorrelation plot using this command: 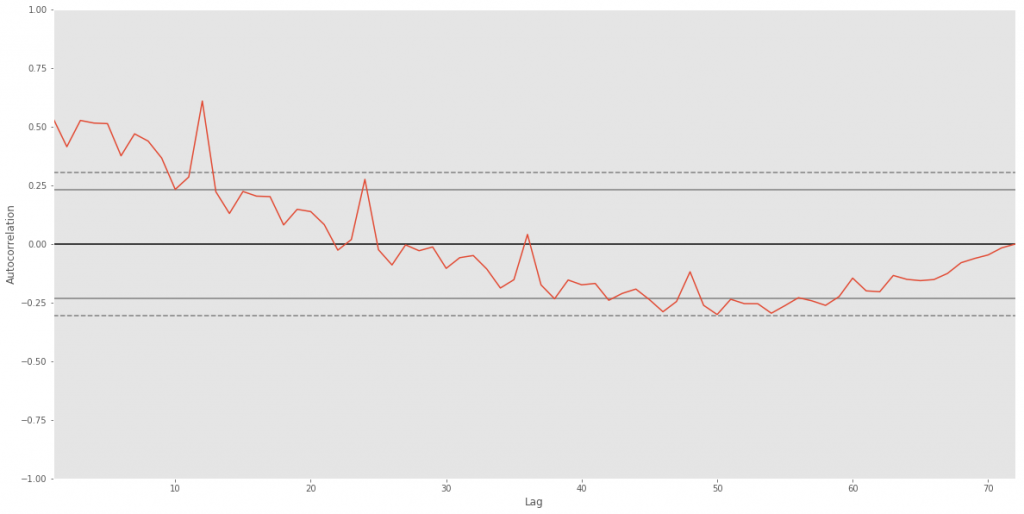 From the plot above, we can see there’s some significant correlation between t=1 and t=12 (roughly) with significant decline in correlation after that timeframe.  Since we are looking at monthly sales data, this seems to make sense with correlations falling off at the start of the new fiscal year.

We can test this concept by checking the pearson correlation of the sales data with lagged values using the approach below.

We used ’12’ above because that looked to be the highest correlation value from the autocorrelation chart. The output of the above command gives us a correlation value of 0.97 which is quite high (and actually almost too high for my liking, but it is what it is).

Now, let’s take a look at stationarity.  I can tell you just from looking at that chart that we have a non-stationary dataset due to the increasing trend from lower left to upper right as well as some seasonality (you can see large spikes at roughly the same time within each year).  There are plenty of tests that you can do to determine if seasonality / trend exist a time series, but for the purpose of this example, I’m going to do a quick/dirty plot to see trend/seasonality using the seasonal_decompose() method found in the statsmodels library.

Note: In the above code, we are assigning decomposed.plot() to x. If you don’t do this assignment, the plot is shown in the jupyter notebook. If anyone knows why this is the case, let me know. Until I figure out why, I’ve just been doing it this way.

The resulting plot is below.

For the purposes of this particular example, I’m just going to use the quick/dirty method of differencing to get a more stationary model.

Plotting this new set of data gets us the following plot.

Running seasonal_decompose() on this new data gives us:

From this new decomposed plot, we can see that there’s still some trend and even some seasonality, which is unfortunate because it means we’d need to take a look at other methods to truly remove trend and seasonality from this particular data series, but for this example, I’m going to play dumb and say that its good enough and keep going (and in reality, it might be good enough — or it might not be good enough).

Forecasting Time Series Data – Now on to the fun stuff!

Alright – now that we know our data fits our assumptions, at least well enough for this example. For this, we’ll use the AR() model in statsmodels library. I’m using this particular model becasue it auto-selects the lag value for modeling, which can simplify things. Note: this may not be the ideal approach, but is a good approach when first starting this type of work.

In the above, we are simply creating a testing and training dataset and then creating and fitting our AR() model. Once you’ve fit the model, you can look at the chosen lag and parameters of the model using some simple print statements.

If we look back at our autocorrelation plot, we can see that the lag value of 10 is where the line first touches the 95% confidence level, which is usually the way you’d select the lag value when you first run autoregression models if you were selecting things manually, so the selection makes sense.

Now, let’s make some forecasts and see how they compare to actuals.

In this bit of code, we’ve made predictions and then combined the prediction values with the ‘test’ data from the sales_data dataframe.

That’s really not a bad model at it shows trend and movements (high/lows, etc) well but doesn’t quite get the extreme values.   Let’s check our root mean square error.

This gives us a root mean square value of 0.64, which isn’t terrible but there is room for improvement here.

One thing to note about statsmodels AR() libary is that it makes it difficult to use this in on ‘online’ fashion (e.g., train a model and then add new data points as they come in). You’d need to either retrain your model based on the new datapoint added or just save the coefficients from the model and predict your own values as needed.

I hope this has been a good introduction of forecasting time series data using autoregression in python. A always, if you have any questions or comments, leave them in the comment section or contact me.

Note: If you have some interest in learning more about determining stationarity and other methods for eliminating trend and seasonality beyond just differencing, let me know and i’ll put another post up that talks about those things in detail.

Thanks for this excellent article. Typo: model_fit.predict should be model_fitted.predict

Thanks. Good catch…appreciate that. I’ve made the change in the post and in the jupyter notebook.

[…] wasn’t planning on making a ‘part 2’ to the Forecasting Time Series Data using Autoregression post from last week, but I really wanted to show how to use more advanced tests to check for […]